The early morning start was made against a backdrop of blue skies and frost covered grass. There were snow showers in the area which could be seen passing to the east and west but the airfield remained sunny all day.

Today was very goood for training with endless visability and the NW 7 knot cross wind adding a liitle challenge for the many training flights undertaken.

Sandra continues her progress towards solo, Steve Bloomer re-soloed after a successful check flight and Alan, a new temporary member, took full advantage of the facilities and put 7 very effective training flights in his logbook.

The afternoon was punctuated by a visit from Roger our ex CFI complete with a jounalist from the Tavistock Times who are covering the handing over of Roger's CFI duties to Don after 14 years on the job.

As for myself, I had the surreal experience of turning finals in a snow shower only to land on the airfield in the sunshine just a few hunderd metres away.

The hangar was repacked as the sun went down but activity continued well into the evening with the committee burning the midnight oil ( well diesel in the generator actually ).

Steve Lewis
Posted by Steve Lewis at 12:39 No comments:

Only flyable for the first half of today, but thanks to another prompt start everyone who really wanted to fly flew.

The wind remained light from NW, but the forecast cloud arrived earlier - and lower - than expected (providing a few seconds of excitement for Barry Green in the K8).

Two of our budding assistant category instructors, Ged Nevisky and David Jesty, practised ‘togetherness’ in the K7/13 as they ran through their patter prior to an instructors’ course later in the year.

Jeff Craggs had a good workout (both dual and solo) in the K13. Then after a check flight, Phil Hardwick flew the K8 (briefly) for the first time since before Christmas.

Today’s ‘Ace of the Base’ was John Howe who, with a little help from Steve Lewis driving the winch, bullied the K8 to 1500’ before releasing and playing in some weak wave over Mary Tavy, achieving 17 minutes. (Surprising, really, considering the wind conditions.)

Just before the cloud rolled in, it was tantalising to see clear skies and lenticular clouds well to the North - but Brentor can’t always bask in great conditions like they were last weekend (while I shivered and was frustrated by low cloud at Lasham).

"Hangar doors were open at 8.30, and then we waited for the cloud to lift. This gave us time for a quick cuppa.
The weather wasnt quite as forecast, the top cover was replaced by 3 knot thermals and wall to wall cloud streets for about an hour.
Trevor couldnt resist it and rigged the Jantar. Alan H played in the K8.
A very useful day with more bronze GFT work done and some instructor prep.
Tea afterwards was made in the dazzling clean kitchen, thanks Heather. As usual there was loads of good work going on behind the scenes, thanks everyone."
Don Puttock

The weather was very pleasant for the time of year. The wind was about 8 knots from the north west , blue sky with scattered low cloud.

A very good turnout with lots of members at the club early ensured the equipment was out ready to go in double quick time.

After a short delay whilst the very low cloud buned off, flying started with enthusiasm. There was a little bit of ridge soaring on the north edge of the airfield; Chris Matten even managed to find a thermal.

There was a lot of training flights with several members working on the General Flying Tests for their Bronze
"C" badge.

On the ground several members continued with their winch training. Thanks Bob for spending most of the day as winch instructor.

The equipment was eventually put away as the sun went down followed by tea and biscuits in the clubhouse.

Steve Lewis
Posted by Steve Lewis at 08:44 No comments:

Today started with all the equipment out by the time I arrived, and Ged and Dave B. grappling with the grey Discovery’s water pump.

The airfield was sodden (despite impressive drainage work by Bob Jones and others) - and there was still some snow on the moor. Flying from the east end, we managed to operate relatively ‘cleanly‘ by landing on a narrow, hard(ish) strip of grass beside the centre track - retrieving gliders on the track.

The day became flyable late morning with a sometimes gusty x-wind from NW, some light showers, cloud base variable and sometimes low over the field, but some good gaps, enabling launches to 1400 feet agl. Three cheers for the Gus Winch - and all who drive it!

We achieved 17 launches - mostly K13, which a few in K8 - until everyone had had their fill. This gave time for a respectable retreat in daylight, with glider wheelboxes etc. hosed down ready for the weekend.

Not a big turnout but we had just the right number to operate.

Phil the Farmer, Dave Rippon, Martin Broadway and Robin Wilson all had a good workout with check-flights - the latter two in a brief ‘window’ before they retreat to sunnier climes.

Our sympathy to Dave, who appeared to be suffering from ‘field treasurer’s finger’ (a large bandage - meaning he could only grip the stick with one hand - only joking!), and well done Phil for making the first tentative steps  towards driving a winching machine rather than a milking machine.

A lightish westerly wind and almost clear skies. The views of the Dartmoor orographic cloud were stunning.

Canopy misting was a problem first thing, which meant we had some delay before we could safely fly. Once that cleared, we had a great day---people getting and staying current was good to see, pre-solo and post solo training was the order of the day.

A cloud street parked itself over the airfield for a short time when it became soarable. Fun for those who were there.

Tea and chocolate cake in the clubhouse to finish-----perfeck.

Very heavy overnight rain has washed away the snow. The airfield was shrouded in fog.

The morning highlights were 3 lectures delivered by Don Puttock on the effects of the approaching stall, the compass and an introduction to charts. These were seperated by tea breaks augmented with Sandra's superb carrot cake; very civilised.

After lunch, it was outside for some make and mend.

John Bolt worked with Roger and Barry Green to renew the ARC on their Astir.

Bob Jones, the club secretary, was wandering about with some strange looking implements clearing the runway drainage channels to ensure that the runway returns to flying condition at the earliest opportunity. He also repositioned the winch to the west end in preparation for Sunday's flying.

The sound of a hoover emanated from the clubhouse where Sandra was clearing up.

Rick and Matthew Wiles along with Simon Thornton did a sterling job of clearing all the gravel that had washed down onto the hangar apron. They even pressure washed the whole thing. Last seen Rick was looking very wet. Perhaps he should have realised  the inevitable outcome of mixing a hose pipe, pressure washer and two teenagers.
Posted by Steve Lewis at 06:53 2 comments:

Doors open 8.45am. The airfield is shrouded in thick mist. A least the snow is starting to thaw.

Was this a wasted day. Not a bit of it.

Don Puttock delivered a lecture for the potential flying instructors on instructional techniques and the patter notes. Bob Pirie, who is also a very experienced instructor, augmented this interesting lecture / debate with his own observations and experiences.
Posted by Steve Lewis at 20:23 No comments:

With a very low cloudbase and light falling snow, even the keenest glider pilots could not make this a flying day.
Posted by Steve Lewis at 11:49 No comments:

8.30 am, blue sky, deep snow and a queue of cars waiting to enter the airfield. Ten minutes of frantic activity involving a rope and a landrover and all the cars parked near to the club house.

The airfield  is covered in a deep layer of snow 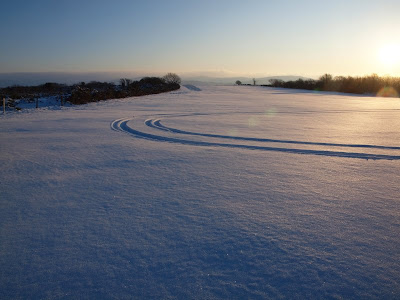 Strong winds from the north east promised wave flying but despite valiant attempts by all the pilots no wave was found. Most pilots managed an extended circuit using the unstable airflow. 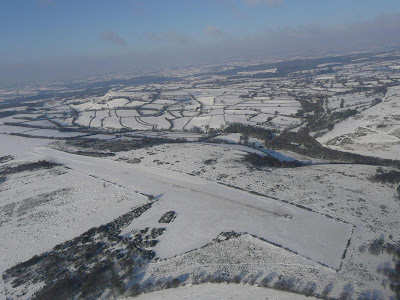 The view of the airfield amidst the winter wonderland made the day worthwhile.

The day finished in the club house with steaming cups of tea and a talk by our Cheif Flying Instructor, Don Puttock, on teaching circuit planning

A good day was had by all.
Posted by Steve Lewis at 05:56 No comments:

No flying today unfortunately. The snow prevented access to Dartmoor and the airfield.

Had to daydream about what could have been and cook the bacon sandwiches at home.
Posted by Steve Lewis at 10:53 No comments:

Early start today starting at 0800, with bacon sandwiches cooking away! 0830 the hangar doors were open and the kit was starting to be taken out of the hangar.

By 0930 when the low cloud cleared, Don Puttock took the first launch straight into wave with Mark Courtney and James Hood following behind. The maximum height being 'only' 3500ft. This fun was then turned into a heart beating moment as the wave gap started to close.

Martin Smith in his SF27 took a flight and stayed up for over 2 hours and got to 6000ft!

The wave stayed all day and everyone had fun in it.

The day ended with bacon sandwiches and steamy tea!
Posted by Steve Lewis at 21:42 1 comment:

The first flying day of the new year was greeted with blue skies, very light winds and a temperature that stayed near freezing all day.

The hangar doors were open  at 8.30am in line with the clubs new year resolution to encourage early starts for the benefit of all club members.

There were plenty of members about to meet and welcome our new Chief Flying Instructor Don Puttock on his first flying day in his new post.

Although conditions were not soarable there was plenty of flying. Experienced pilots were maintaining their currency, the pre solo pilots continued with their training and a few pilots took some advanced training.

The most outstanding flight of the day must have been Sandra flying with Don. The pair managed to fit in 8 simulated cable breaks in one flight. Must be some kind of record.

Also worthy of note were Roger and Barry Green who both managed to get part of their Bronze "C" General Flying Test signed off.
Posted by Steve Lewis at 18:27 No comments: