A slow start to the day as the private owners rigged and the airfield set up ready for flying. We were joined by the CFI who after seeing things were running smoothly, left with some club parachutes to take to North Hill for re-packing.

First flight of the day was myself in a conversion flight to the Zugvogel 3B. After a briefing from Roger Green I launched straight into a thermal above the winch. I quickly climbed to 1800ft. I flew towards Black Down and then back towards the scrapyard and found some more lift. As conditions were seeming good, I didn’t want to deprive the syndicate members and landed after 22 minutes. 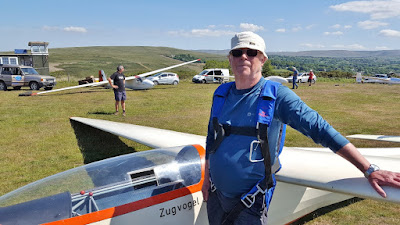 Steve Lewis took off in the Zugvogel and was soon seen climbing away. He was soon followed by Malcolm in the K8 who found a thermal straight off the winch and soon disappeared. Phil Hardwick, Roger Green and Richard Roberts all pulled their aircraft forward ready to launch. Roger and Richard were soon climbing away, but Phil unfortunately was soon back on the ground. He disappeared down the winch to launch Steve Fletcher and sort his brain out.

With only Phil’s glider on the ground, he was brought from the winch to have another launch. This time he was soon climbing away from the top of the launch.

Steve Lewis and Malcolm returned after flights of 2 hour 9 minutes and 1 hour 58 minutes respectively. Andy Davey jumped into the Zugvogel and I got ready in the K8. Both of us were soon climbing away. So all six gliders were airborne and soaring.

Only 10 launches, but an astounding average of 1 hour 48 minutes per flight. Longest flight of the day was Richard with 2 hour 46 minutes. A quick thankyou to John Smith who arrived at the airfield to do some work on the bus project whilst he is unable to fly.