The Kelly College cadets could not have had a better day for their inspection. Brigadier Munro listened to some excellent presentations from the cadets before being shown how to fly the simulator.

The inspection team then visited the launch point, and the Brigadier chatted to cadets and members while we took Squadron Leader Peter Westley for a short soaring flight. Peter hadn’t flown in a glider since his solo in a Kirby Cadet Mk3 some undisclosed time in the past. 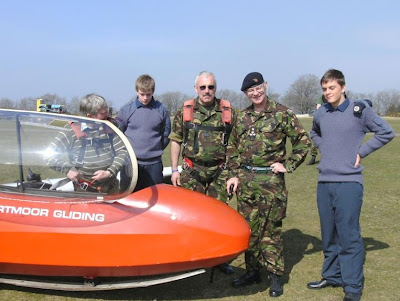 Some of the cadets are now completing the launch and landing with the instructor coaching them around the circuit, so very well done to them.

All the cadets flew thanks to the fantastic support from the DGS team---Ged and I instructed, while Alan Ballard, Alan Carter, Robin Wilson, Becky and Matt MacKay kept the ground training and field operations
going. Very many thanks to everyone for making this a very successful day.

We now have a new gas BBQ (tea fund acquisition), and Alan has been idly considering various recipe options for BBQ parrot. Alan don’t do it---
sausages will taste much nicer.