A clear blue sky, temperature due to rise steadily to the higher 20’s and RASP not predicting much if little action until late afternoon there was not a lot of enthusiasm to get going very quickly. A couple of privateers decided to start rigging. Team Zugvogel rigged G-CHSH and Hugh decided to rig G-CFUB.

Eventually we were ready and nominated Martin Cropper to take the first launch. After two 7 minute circuits with reports of some bubbles of lift and some smoother lift to the south I decided to take a launch. From the top of the launch I turned towards Black Down. I found some weak lift but stuck with it climbing very slowly by flying smoothly and making very small adjustments to keep climbing. Eventually the lift improved and I managed to climb to nearly 1800ft. I then flew south east and found some very smooth air to the southeast of the airfield. When this petered out I turned back along the line I had just flown, only to find sink. Not managing to find any more lift I landed after 31 minutes.

Malcolm took to the K8 and managed 42 minutes in a similar manner to me. Roger Green and Addy Davey only managed extended circuits in the Zugvogel. Steve Lewis did manage 28 minutes in the Zugvogel and on a second attempt Roger stayed aloft for 23 minutes.

All this action spurred Steve Fletcher to rig the Open Cirrus. He had two flights, the longest of which was 35 minutes.

When things were a bit quiet we stopped for a socially distant lunch.

Even the Buzzards found it too hot to fly. 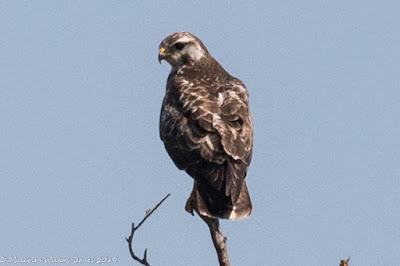 The last flight of the day was Malcolm in the K8. He managed to climb to 2200ft and then pushed back into wind where he found an area of rough air and a narrow thermal which he used to punch through the inversion. Above the inversion he found an area of very smooth lift which he used to climb to 3000ft. With everthing other than the K8 and winch packed away, Malcolm finally landed after 1hour 3 minutes to claim flight of the day.

It was good to see John O’Connell at the airfield today. He wanted to get back into the swing of airfield operations by helping out. He also spent a period of time in the simulator to get some hands on flying. He eagerly awaits the start of two seater flying. Hopefully this will be not too far away.

Thank you to everybody for a good days flying.

Peter Howarth
Posted by Steve Lewis at 23:12 No comments:

Setting out for the airfield, the weather did not look too promising. There was a lot of low cloud sitting on the tops of the tors all across south Dartmoor. At the airfield the cloud was a little higher but still not looking great. The RASP forecast was suggesting some soarable conditions later so the decision was made to rig the gliders and wait for the improving weather.

The forecast was for the southerly wind to swing a little to the west so the winch was positioned at the west end. However, by the time that wanted to bring up the gliders, the wind had a little east in it, so a quick change of ends was required and the winch was dispatched to the east end.

As the cloud base improved the cloud over the airfield evaporated leaving the cloudscape a little sparce. This seemed to be due to sea air coming up from the Tamar valley in the southerly wind. Early flights were best described as a struggle with the cloudbase at 1600 feet and climbs a bit hit and miss. My own flight in the Zugvogel 3B was a 14 minute grind never higher than launch height and much below 500 feet. Good practice as this definitely concentrates the mind.

Conditions did improve allowing flights for most pilots of over and hour (except me). prize for the longest flit is shared between Phil Hardwick and Steve Fletcher both of whom acheived 1 hour 31 minutes.

The strong conditions were always to the east but difficult to reach and we had to content ourselves with the much weaker sea air.

With our two-seat trainees and less experienced solo pilots unable to fly until restrictions are lifted, it would perhaps be more appropriate if the ‘Sunday Soarers’ were renamed the ‘Arfur Duzzen’ as six regular Sunday stalwarts surveyed the sky and decided that “Sizzlin’, it ain’t!”.

There was a prospect of conditions improving later as the wind veered south-westerly, about which more anon, but for the present a leaden grey sky was all that was available to tempt the six to ‘take up slack’.  Peter Howarth played met scout into a moderate southerly, and on his second launch managed to extend the circuit to a full 9 minutes, having found some gentle lift around 180 degrees of each orbit.  Martin Cropper then jumped in, again finding reduced lift before the Met Office Tavistock’s very accurately predicted raindrops arrived at 1100.

Rejoining the fight some forty-five minutes later (suitably refreshed), Richard Roberts noticed that the leaden skyscape had some darker lines of energy beneath, forming from the south.  Catapulted back into action, this was Cropper’s chance to show the others a clean pair of heels.  Releasing at 1,200ft however, he found himself a full 300ft above cloudbase...!  It was only by allowing sink to take him down to 800ft agl that he was able to move under the cloud, get 4 up but then promptly have to move out to avoid losing visibility.  This did, however, coupled with a suspicion of wave generated downwind of the Wallabrook stream, enable him to achieve a duration of 19 minutes – flight of the day in the bag!  Almost.

As the morning wore on the cloudbase lifted, enabling Phil Hardwick to actually connect and circle in a thermal for long enough to equal Martin’s (short lived) record; as did Steve Fletcher, achieving 1,700ft agl as he gently drifted downwind before deciding that the K-8’s short legs required him to scamper home.

And so, by 1430, with the sky looking ‘similar’ and the ‘Arfur Duzzen’ having cycled themselves through cockpit to winch and back, we decided to draw stumps.  Back down in the hangar Colin dealt them a different challenge: how could the six invert K-13 DMX’s fuselage while remaining socially distanced?  A problem which was solved by, well, a six-foot rule.  Ironically, as we put the winch to bed and shut the hangar doors the sky began to clear, blueness abounded and, again just as predicted by Met Officer Tavistock, cracking white cumulus began to pop.  Had we had a full flying list we would still have been flying and able to take advantage of it..!

Roll on the return of flying for all..!

Martin Cropper
Posted by Steve Lewis at 10:24 No comments:

With the unsettled weather continuing, today we were faced with an initial low cloud base, but was due to rise during the morning. We set the field up and prepared the K8 to start flying as soon as the weather allowed.

I took the first launch just after 10 O’clock and managed to find some reduced sink before landing after 9 minutes. Next into the K8 was Martin Cropper for his first flights since lockdown. He had three flights of seven, four and five minutes. He was very happy to be back in a glider again.

Hugh Gasgoyne, Phil Hardwick and Steve Fletcher each had two flights of varying length. The longest was a staggering 16 minutes by Phil finding the only bit of rising air today.

We were able to use the new tow-out modification on the pick-up. This was reasonably successful, but Scratch will have to put on his thinking cap to finalise the design and make it DGS proof. 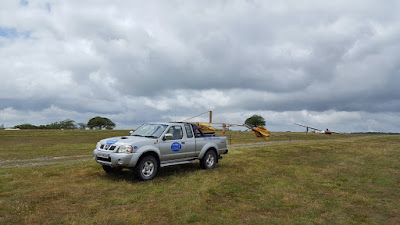 Thank you to those who came to the airfield today. Only ten flights, but everybody flew who wanted to.

Peter Howarth
Posted by Steve Lewis at 20:39 No comments:

With clear blue skies another warm day loomed. The forecast gave easterlies 10-15knts. RASP gave soaring conditions to start late morning and improve during the afternoon. With only a few members at the airfield to fly, Phil rigged his Astir and Steve rigged his Open Cirrus. With the K8 off-line the K13 was got ready for me to fly.

As duty instructor I was elected as sacrificial lamb to take the first launch. At the top of the launch I pushed into wind but only found reduced sink so decided to fly back towards Brentor where I found some small bubbles of rising air, but were too small to use. I therefore decided to join the circuit and land. As nobody else was prepared to launch I took the second cable to see if things were any better south of the airfield. This resulted in a similar flight and I was soon back on the ground. We decided to wait a while and see if things improved. 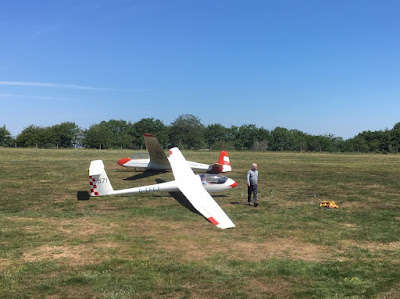 After nearly an hour, Phil decide to take a launch and see if conditions were any better. A similar flight to mine and he was soon back on the ground. We decided to stop again for a leisurely lunch. An hour later some small cumulus had appeared away from the airfield, so I was again elected to take a launch to test the conditions. This time I found some heavier sink and the approach had become rather turbulent, so I decided to return the K13 to the hangar. After discussions with both Phil and Steve they too decided to put their gliders away for another day.

So although the day promised possible wave or thermal not much happened.

Peter Howarth
Posted by Steve Lewis at 13:37 No comments:

Clear blue sky. RASP was suggesting some thermal activity midday and onwards but not looking strong. Wind today was easterly 12 knots. 12 knots from the east!!!! must be a wave day. A close look at the atmospheric sound did not look great for wave but we'll see,

Today's grid consisted a club K8,  K6, 2*Astir CS's, Open Cirrus and the Zugvogel 3B. we eventually encouraged Mike to take a launch in his Astir at 11am. He headed out to the east looking for wave but found only a area of reduced sink in very smooth air. So the wave was trying to form.

Over the next couple of hours launches only resulted in extended circuits the longest of which was Andy Davey in the Zugvogel 3B at 16 minutes.

At 1pm things changed. The west end of the airfield became thermic with lots of thermal bubbles roaring skywards giving 4 knot+ climbs to 4000 feet. Wow. Throughout the afternoon the conditions remained strong with 7 pilots bagging flights of an hour or more, the best of which was Steve Fletcher in his Open Cirrus with 2 hours 11 minutes.

The flying was interesting. Westwards from about half way down the airfield there was frantic thermal activity with lots of very narrow cores some of which were really quite strong. Eastwards from the mid point of the airfield, things were very different. An area of 6 knot sink gave way to very smooth air just east of the end of the runway. This smooth air had reduced sink and if you were careful some beats across the wind with slow climbs could be found. The best I recorded was only 1.4 knots which lasted for just one pass and then faded away. So the wave was definitely trying but not quite getting there. The area of smooth air stretched from just south of Tavistock to Meldon Reservoir in the north.

Steve
Posted by Steve Lewis at 11:20 No comments: