The RASP forecast indicated a low level cloud day but  thankfully that only occurred in the low lying areas so we had the opportunity to get in the air.

We were joined for trial flights by Jeff Smith and David Hutton. 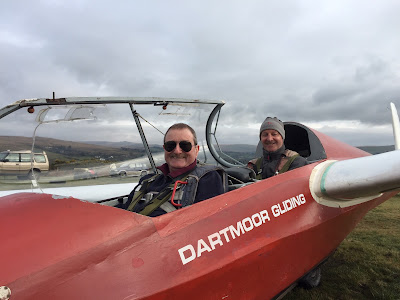 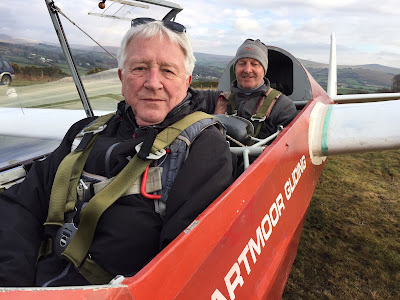 The rest of the members completed circuits with Leith leading the way with a 16 minute flight in his Dart.

Thanks to every one for their contribution for another enjoyable day.

Mike Jardine
Posted by Steve Lewis at 13:39 No comments:

What a difference a day makes. The weather on Friday was awful. There was heavy rain, strong winds and a cloudbase so low and dark that the day seemed to be twilight the whole day. If there was ever a day to wish to emigrate to warmer climes then this was it.

So what a surprise on Saturday. The day started cold ( frost on the car!) but the sky was mostly clear and it was calm. Would the airfield be flyable? Surprisingly yes. There were some puddles here and there but the grass was mostly firm.

The start to the flying day was delayed a little by some low orographic cloud sitting over the runway, but once this had disappeared it was game on. The first flight was a check flight with Phil Hardwick flying with Rick. It was nice to see Phil flying again after his recent hip replacement. The other notable early flight was Steve Raine flying the K8 for the first time in a very long time. Getting ready for some soaring Steve?

The flying conditions were pleasant. The air was absolutely smooth and the wind was mostly calm. There were showers in the area but they stayed well clear of the airfield. Perhaps this was bad news for the soaring pilots but made for ideal conditions for today's visitors, Gail Barr and Rosalind Wiggins. Gail enjoyed herself learning to operate the controls and has promised to return soon for some more flying lessons. Rosalind did extremely well mastering her misgivings about flying in a small unpowered aircraft. Well done.

Also joining us today was new member Malcom Wilton-Jones ( and experienced glider pilot) who has recently moved into the are from Spain. Welcome to the club Malcom.

The solo pilots made good use of the K8. Even though there was no lift to be had, they were still challenging for the longest flight. There were several runner up flights of 7 minutes  but the clear winner was Allan Holland with a dizzying 8 minutes. How can I tell it's been a while since we have seen a thermal?

Steve
Posted by Steve Lewis at 07:55 No comments:

After some winch problems on Saturday, Scratch was at the airfield early to try and fettle one of the winches back to health. ML2 was soon roaring into life, but unfortunately ML1 is going to be off line for a while waiting for some air pipes and fittings to be sourced.

With only four members at the airfield to fly, it was decided that a K8 would be readied for all to fly. Accuracy of approach and landings was the order of the day. The target in line with the launch hut and on a line between the track and launch hut. This would avoid any retrieves and the next launch would proceed soon after.

We had a visit from a prospective new member, Malcolm, who has moved to the area. He will return another day when we can introduce him to flying at Brentor.

Hopefully we will get a few more members out of hibernation and back at the airfield to do what we all want to do, fly.

A big thank you to Scratch for getting the winch up and running. Also Roger and Martin for sharing the winch duties. Eight flights and a good bit of fun, we made the most of the day.

Peter Howarth
Posted by Steve Lewis at 15:20 No comments:

High pressure is in charge of the weather. In the summer this would normally mean endless sunny, warm days. However, in the winter, this has meant a week of low gray clouds with some low temperatures. Today the wind was non existent for the most part. But the good news is that is was flyable so that is exactly what we did.

The first task was to take the newly painted and refurbished Launch Hut to the east end. The refurbishment has been completed by many members over several weeks. The week's efforts have seen the outside repainted and some of the woodwork replaced. Many thanks to all those involved. This was not the only work undertaken this week. While we were on the airfield enjoying ourselves flying, Chris Matten was busy rewiring the standby generator. It is now fully operational. Thanks Chris. Rick (and Scratch?) spent the start of the day fixing a particularly stubborn fuel leak on the Red Discovery which eventually required the fuel pump to be partly disassembled to fit new seals.

Up on the airfield we welcomed Derrick Rayne who was visiting for some air experience flying with me. The K13 was busy as memebers kept up their skills with Instructor Mike Jardine. CFI Mark Courtney was also flying with us today. He flew with Mike Bennett with the aim of Mike completing his Bronze C in the near future. Mark also flew with Roger Green as a prelude to Roger taking BI training this year.

A nice day with friends.

Steve
Posted by Steve Lewis at 08:58 No comments:

I drove to the airfield in thick mist and drizzle, but an optimistic forecast gave a possibility of flying early afternoon. The first two trial flights were cancelled as the forecast would not lead to the possibility of completing their flights. The last trial flight was asked to phone back later when it was known if there was to be any flying. Eventually, with regret,  it was decided it was a no flying day.

On returning to the clubhouse it was decided to rearrange the hangar to make room for Colin to continue the aircraft maintenance in hand and to bring the launch hut from the far east end to store it in the hangar ready for painting should this bad weather continue.

All that’s left to do is to wish all members and families a happy new year.

Let’s hope 2019 will bring some good weather and soaring.


Peter Howarth
Posted by Steve Lewis at 07:45 No comments: