A small group of members started gathering, and the first task was to extract the supacat winch from the hangar. The red tractor refused to start even when jumped from one of the discos. So we left the disco connected to try and charge the battery to try again later. After some teas and coffees we had another go. Still refusing to start we took the battery out of the green tractor and managed to start the red tractor. With no cattle in the top field we placed the winch at the far end only to find the cables were still too short to reach the launch point. To save time we decided to move the aircraft forward of the launch hut and start flying. 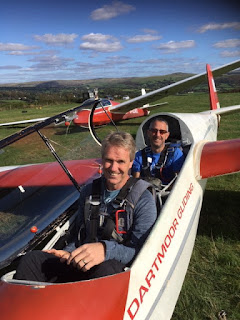 Our ODC was John Allan. After a briefing from BI Richard they were soon off into the air at a rather later start time of 12:10. John enjoyed his day getting involved and with some valuable air experience. Hopefully we might see him back again.

An ODC student from a couple of weeks back did return today. Peter Mountford flew with me and was soon getting to grips with coordinated turns and trimming the glider. During a 26 minute soaring flight, he successfully climbed to 2100’ with some very smooth turns.

Our other student John Smith experienced some log walks back down the field after some valuable cable break practice. With a bit more polish and accuracy he will soon be back solo.

The afternoon predicted soaring conditions produced a hive of activity from the solo pilots. All had varying degrees of success. Bob Sansom (K8) 15 minutes, Malcolm (K8) 1:01, Hugh (K6) 1:09 and Barry (K8) 47 minutes. The longest flight of the day was Steve (Open Cirrus) 2:05.

Thank you to Heather for retrieving and winch drivers for producing a smooth service of cables and launches. Also for everybody who kept things moving at the launch point.