To those of you suffering from the effects of soaring withdrawal in this beastly lockdown, I would like to put forward a partial antidote - in the shape of the Condor2 Gliding Simulator! Probably known already to most of you (as we have it installed on our simulator in the clubhouse) I can heartily recommend it as a means of keeping the cross-country soaring pilot’s mindset current. There is a Multiplayer function in the software which allows for virtual cross-country competitions. If you have a reasonable computer and a reasonable internet connection, then you have the main pre-requisites.

At DGS we already have a small band of Condor2 devotees, myself included, but it would be great if we could enrol more pilots into this virtual soaring group. Just drop Rick a line and he can show you how to connect to his hosting server for the Multiplayer sessions. There is a one-off cost in buying the software but it’s well worth it. Get it here:

The only other thing you’ll need is TeamSpeak3 which is a free download for the audio.

I have done a handful of tasks set by Rick in various gliders, and it is always an enthralling experience. But the real fun element is that you can see all your fellow competitors around you and in permanent audio so you can see (and hear!) how everyone is doing. There is even a dynamic points-scoring table that updates as you progress through the task. So, to give you a flavour I will recount the task that we flew on Sat 9th January. 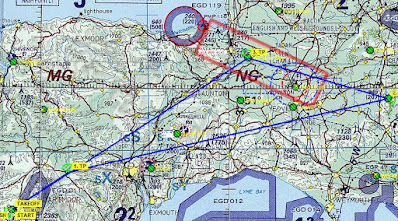 Rick had prepared us a cracking task – lots of long glides in the strong conditions (hopefully!) so I thought I’d better pick something slippery rather than my trusty K6-CR. There comes a time when one must abandon futility in favour of getting ‘the right tool for the job’ - to that end I chose the Duo Discus as it seemed (in my hands anyway) to be the most forgiving high-performance glider to fly. I admit I did have a little practice before the task!

We duly lined up on the starting grid at Brentor in our chosen gliders and awaited the nine tugs to taxi one by one through the fence (!) to our launch position. The aerotow simulation is pretty good so Rick briefed us to keep the trim well forward for the aerotow to save tug upsets. The fun really started when we were all off tow looking for that elusive first thermal. To make things more interesting, the tugs seem to randomize where they drop you, so I could hear plenty of complaining over the headset! I think Rick was dropped off somewhere south of Tavistock. As the race start timer ticked down from 5 minutes I could see most of the gliders getting in position near the start line. At the “Race is on!” message they all hurtled off towards Whiddon Down. I was struggling to get centred in my thermal so chose to play it cool and get nice and high before venturing off.

When I finally got hooked up to a core and climbed to 4000’ I could see most of the field were over 10 miles away. Time to try and catch up a little – so I endeavoured to fly with the McReady speed-to-fly set optimistically for an expected +5 knots at the next thermal. What I finally achieved however was only 3kts on the averager, so a bit of a rethink was needed. Although the other pilots were all miles away, the banter over TeamSpeak is always at the same levels. I could hear some heckling of my ‘K6 mindset’ over the airwaves – doubtless aimed at my over-conservative hanging around in the start quadrant.

After Whiddon Down it was the long haul to Compton Abbas, still into wind and some 60 miles distant. Some of the other guys were so far ahead of me they had disappeared from the view (default setting visible to 12 miles I think). I could see some of the cloud shadows were lining up more or less on track so I tried some ‘dolphining’ in an attempt to increase my average speed. There was some limited success with this tactic as I could see Simon some 5 miles ahead of me, and a couple of the others were at 8 miles range. I had been flying for over an hour and I needed all of that time to get my thermalling technique a little tidier. This effort was rewarded 38 miles from Compton Abbas where I had one of my best climbs of the day. The vario needle hit +10kts near the top with +7.3kts on the averager.

By the time I rounded Compton Abbas I could hear the others speculating how they would deal with the airspace at Weston-Zor. Rick announced he had a plan. “What’s your plan, Rick?”. Silence. Being a somewhat conservative soul myself, I decided to track north until parallel with the TP, then cross the zone at right-angles to minimize the distance flown. 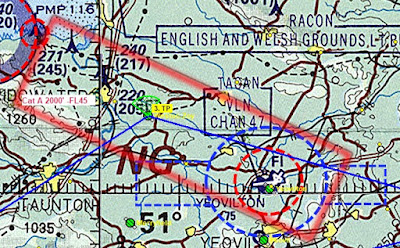 However, there was a price to pay as this extended the task distance. By this time though, I was really enjoying the Duo Discus after struggling on the first two Legs. I liked the way it would tolerate being flown at 50kts thermalling at 40 degrees of bank.
So, we were all strung out on the last leg to Brentor, although Rick, Scratch and Phil were all so far ahead they had gone off my radar. Nevertheless, I tried to be braver on this leg and stuck to the speed-to-fly indications as dictated by Mr McReady. There were still plenty of good clouds around so I set it to +5kts. I could see Ed some 8 miles ahead of me. Final glide looked ok but I decided to take a strong thermal rather than chase Ed down. This appeared to work as I was now higher than Ed, however, he must have had his nose down as the distance to him was increasing. Over the last 10 miles I was able to bring the speed up, but for some reason I avoided going near VNE – perhaps the old K6 mentality creeping in?
At BRT the fast boys were all over the finish line. Ed was still 8 miles ahead when he finished despite my attempts at ‘pushing on’. As it turned out I could have chosen to cross the line at VNE rather than my stately 120kts. A good learning day – can't wait until I try this for REAL!! 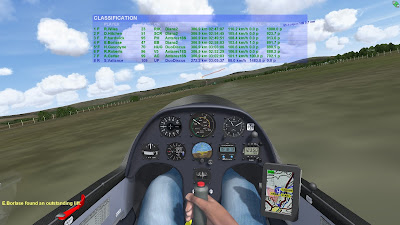 Hugh Gascoyne
Posted by Steve Lewis at 08:46 No comments:

Careful examination of the forecast and the airfield conditions revealed a possible flying window early on Saturday. The airfield was very wet after weeks of rain but today it was so cold that the ground was frozen and therefore usable, at least, until it defrosts. There is an occluded front forecast to arrive early afternoon. So an early start was required and members responded to the call and had the aircraft out and the winch set up by 9:30am. Excellent. After a short delay to get on top of canopy misting it was game on.

Today's wind was very light from the north and about 10 to 12 knots at flying heights. The flying conditions were extremely smooth making for some very pleasant flying around the circuit. Unsurprisingly the were no thermals or ridge lift.
The solo pilots flew the K8 and the 2 K13's shared the load with training flights for our pre-solo pilots and rear seat practice for our potential IFP's. Instruction was shared between Mike Jardine and Rick Wiles.
All too soon it started to cloud over. we were able to carry on flying until the front arrived overhead at about 12.45pm when the gliders were rushed back to the hangar, washed and put away just before it started to rain, sleet and snow in equal measures

Well , no flying  today ,but just enough time for the ‘Big DGS tidy up’ to continue. An ad hock day when Rick and Scratch (along with David our friendly neighbouring farmer and his forklift) managed to remove not one but TWO daf 1160 engines out of the winches!  Other equipment was also removed from them for recycling to other winches further afield in wales ( when travel permits).

The steel cables were removed from the drums as well as all the scrap metal and wood on the site being segregated ready for recycling or burning soon.