A pit inspection revealed more lake views than runway views.  The drainage sump at the cross track was full and the drains flowing into the road culvert outside the entrance gate were at full bore.  Dark skies abounded and then the heavens opened.  The One Day Course candidate, Robert Howe, phoned up promptly anticipating the cancellation of his course by the Duty Instructor, Mike Jardine.  Robert, we look forward to meeting you when you have rebooked on a better day.

Time to stoke up the wood burner and concentrate on indoor work in the club house and in the hangar.  Freshly laundered glider and canopy cloths were returned to the launch point trailer (Ed: Mrs S seems to be washing a lot of glider cleaning cloths recently).  In the club house tea was brewing. Robin was working on the accounts.  Our two new trainees Guy Balmer and Matthew Stone were raring to go.  So ground school lessons commenced.

Mike re-briefed Circuit Planning; Peter briefed Winch Launching, and I briefed on glider batteries, glider cleaning, and glider care. Andy Davey and others chipped in as appropriate. The physical heft of a 12V 7Ah battery always surprises trainees and reinforces the need for them to be properly secured in a glider.  Guy and Matthew were shown the radio and glider battery charging station in the Tech Office and how to use it.  Phil Hardwick also progressed some projects as did John Smith who disappeared to the east end to fix some leaks in the control tower of the launch bus that we identified on Sunday (Ed: There were heavy showers then too).   Training progress cards were duly signed to reflect the morning's activity. 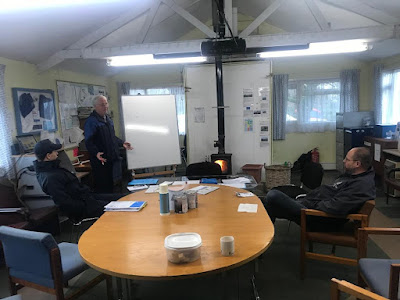 Then the Richard Roberts and Dad combo arrived. They also promptly disappeared to the east end and returned with his trailer ready to take the Discus up to Swindon for its annual inspection and maintenance.  Although they were off in a trice it didn't stop Richard passing out a few tasks in the clubhouse that were linked to his Grand Strategic plan (Ed: By the number of Richard's emails and texts throughout the day Dad must have been driving all the way there and back!).  Our Secretary, Steve Fletcher, was on site and busied himself with some projects including the mail.  The CAA has confirmed that K-13, G-CHXP is no longer registered to Dartmoor Gliding.

Gavin and Colin conferred on maintenance and documentation issues and which spare parts needed to be ordered from Germany  (Ed: The recent BGA audit has certainly has had an impact on the maintenance team).  Then Colin whipped John Smith into the hangar (Ed: He is a hard task master) to start on some surgical hammering to remove the second aileron from GDK (Ed: These are going to be replaced by new, crisp, smooth acting hinges).

And now to the anonymous aviation blooper (Ed: In Aviation bloopers and mistakes are always anonymous to protect the innocent, as well as the guilty).  One of today's trainees asked where he could buy a copy of the BGA's Student Pilot Manual.  One of the instructors pointed to the "New Joiners pack" that was poking out of the trainee's ruck sac and the brand new copy of the Student Pilot Manual within.  (Ed: I am very glad that our secretary had left the site by then.  It was a result of his intensive efforts that produced the new joiners packs.  It would have been disheartening to see a grown man cry.)

After lunch members started to slip away to either more DGS work off site, or just with the satisfaction that they had played their part in winter maintenance, in its many forms, which keeps Dartmoor Gliding operating  (Ed: Only the most observant would have noticed the lack of low voltage alarms emanating from the solar set in the clubhouse that indicated that the batteries and their configuration had been updated earlier in the week which should make the system more resilient during the short, dark winter days. Also similar work had been conducted in the launch bus. Thanks Scratch).

In conclusion, we might not have flown today but lots of winter projects, glider maintenance, and ground school training were all progressed.  Thanks to all.